The Forex Pro Island Automated Trading Bot just hit the shelves and people seem to be loving it. If you don’t already know, this is an autotrader for FX, or in other words, it does all of the trading for you. Now, make no mistake about it, because there are plenty of autotraders out there.

However, the issue is of course that the majority of them either don’t work or are just downright scams. Yet, we of course know for a fact that the Forex Pro Island app is the real deal. After all, it was created by Andrew, the very same mentor behind our Income Mentor Box Day Trading Academy.

Yes, the Forex Pro Island Auto Trading Bot is legit. There is no doubt about this. It is not some kind of scam that will steal your money. With that being said, people are still wondering exactly how profitable this FX autotrader is and what its capabilities are.

As stated on the official site, the advertised win rate for this particular app is supposed to be at 74%. Yes, this is a great win rate, if it’s true. So, how did the Forex Pro Island Bot perform? We did our very first live trading session with none other than Andrew at the helm. A little hint, this software exceeded our expectations and actually managed to perform much better than the official site itself indicates. Today’s Forex Pro Island review is all about our first live trading session and the profits we managed to make. 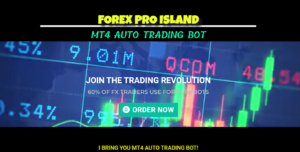 Alright, so the first thing that you need to know here is that Andrew traded for a full day with this new software, his own creation. Today we are here to talk about the results which he managed to achieve through trading with the Forex Pro Island app.

The first thing to know here is that there were a total of 23 FX trades placed by the app during this first day. Keep in mind that this software is designed to trade FX exclusively. Moreover, this Forex Pro Island system comes complete with 6 built in bots, each of which trades a specific currency pair. For these first trades, Andrew activated all of the bots to see what would happen.

The first thing worth mentioning about those 23 FX trades placed by this software is that a whopping 18 of them turned out to be in the money. Folks, 18 our of 23 of the trades placed by Forex Pro Island software were winners, with only 5 of the 24 losing money, and not very much either mind you. This translates to an ITM rate of about 79%.

Just as a reminder, the official website states that the average or expected ITM rate for this FX autotrader is 74%. Andrew saw his software produce a 79% win rate, which is 5% better than even he expected. Of course, we are very happy with this. The simple fact here is that most pieces of software like this could not win even 50% of the trades they place.

When compared to other automated trading bots out there, Forex Pro Island software blows them all out of the water. Thanks to the sophisticated algorithm incorporated into this app, it works very well to select the very best currency pairs to trade. Remember people, all of the work gets done for you here, with the app doing all of the research, analysis, and trading for you. Winning nearly 4 out of every 5 trades without having to lift a finger is a great deal as far as we are concerned.

The other thing you probably want to know about here is how much money the Forex Pro Island Automated bot managed to put in Andrew’s pockets. Well, as mentioned above, yes, there were a few losing trades, but nearly 80% of the 23 trades placed were winners. In terms of the overall profits, Andrew managed to bank somewhere around $1,100.

Now, $1,100 might not seem like a whole lot of cash for a full day of currency trading, but this is not really true. A payday of over $1K for a single day of trading is very impressive either way. What makes it all that much more impressive is the fact that all of this was done without any human intervention. The Forex Pro Island app open and closed all of the trades on its own, without Andrew having to do any of the heavy lifting.

The bottom line is that that this auto trading bot is one of the best automated trading systems in the world for FX. As you can see from the video, the software itself produces really reliable signals which do lead to profits. As shown in the video, this software managed to win 18 out of 23 FX trades for a 79% win rate, which is about as good as it gets when it comes to autotraders.

As stated above, in the main review, this led to profits of roughly $1,100, which is also quite impressive. Remember folks, $1,100 in a single day of trading is about as good as it gets. Remember that this was all done without heavy lifting on the end of the user. In other words, you can easily make over $1,000 per day by doing no work at all. The Forex Pro Island app does all of the work for you.

If you have not yet tried using the Forex Pro Island Automated Trading Bot, we would definitely recommend doing so. We stand behind this auto bot 100%, as it was created by our very own mentor, Andrew, the same trading professional behind our very own Income Mentor Box Day Trading Academy. If you want to make money trading FX, but you have limited knowledge and/or time, this new autotrader is your best bet at healthy and consistent profits.